Imagine cutting down active shooter or medical emergency response time in your schools to several minutes or less, rather than 20 minutes or more … the SchoolGuard® panic button with one-of-a-kind Hero911® makes this possible.

To show how effective these two mobile apps are and how they work in concert to significantly cut down on notification and response times, Detective Tony Stewart, director of active intruder training for one of the largest school districts in Missouri – a rural district with over 6500 students and 800 staff spread out over hundreds of miles – explains how they were able to prove SchoolGuard and Hero911 help students and staff, as well as law enforcement and the community, and what he feels are the biggest advantages. 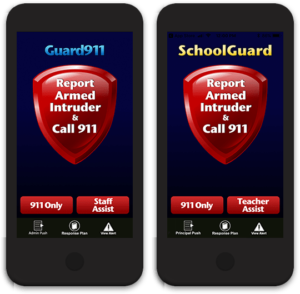 No other panic button app has the Hero911 network of over 60,000 federal, state, and local, on- and off-duty officers who can respond to an active shooter or another type of 911 emergency as quickly. This FREE feature, made possible through the ONLY federally approved Hero911 app, has already saved lives.

Detective Tony Stewart said, “In Missouri, intruder training is required, but the mandated training session is about a 20-minute program that is not realistic. It is not enough to prepare school staff for a true active shooter emergency. Since school shootings are occurring so often now and our district only has one 911 dispatch center, seven ambulances, and no major hospital; nine city officers, and dozens of Sherriff spread over hundreds of miles, SchoolGuard was the first step in giving some control to the staff in case of emergency and speeding up notification and response times. The school district chose it based on its simplicity, affordability, and most notably, the Hero911 network.

Once we implemented the safety app technology, I realized teachers, administrators, and first responders needed to have an additional active shooter plan, with no detail spared.

The only way to do that was with an intense, very realistic active intruder training drill held at a school (without kids present) with teachers and first responders, an ‘unknown’ assailant, and the SchoolGuard and Hero911 mobile apps.” “After a year of planning, we had our first active intruder training day. It was a very realistic depiction of the kind of chaos that happens and what it’s like to try to get help during an active shooter situation. It was so realistic, our participating teachers and first responders felt the effects during and after, as if it were really happening.

Why is a highly-detailed, realistic drill necessary? No two active shooter incidents are the same. There is no step 1, step 2, step 3 to fix it or make it go away. There is no ‘always.’ It is pure chaos and trauma and the only way to know what to do is to live through it, learn what is missing in your active shooter plan, and improve on procedure so you minimize the mistakes that can cost lives.

During the enactment, 160 participating teachers and staff could see how hard it was to get to a classroom phone, call 911, and protect their students at the same time. It’s nearly impossible. Which is why SchoolGuard and Hero911 are invaluable.

The apps work because teachers have their cell phones on them or within reach and can push the SchoolGuard panic button while they’re taking shelter and getting kids to safety. As soon as the panic button is touched, 911 and the Hero911 network of officers are immediately and simultaneously notified. The closest officers can be at the school fast without the delay of only dispatching through 911.

During our drill, once activated, it was mere minutes for officers to arrive. And we had law enforcement spread out all over the area, just like they would’ve been any other day. I was impressed with the speed and accuracy that the Guard911® apps brought to the situation.”

During an active shooter incident, do you shelter in place or run from the building? Do you call 911 or get to the PA? If you run from the building, how do you make sure every child in your care gets out and stays safe and accounted for? And how do you reach law enforcement and the parents with accurate information? All these dilemmas can be solved with in-depth preparation, SchoolGuard and Hero911.

Detective Stewart further explains, “The goal for every U.S. school is to have active shooter incidents be less of a ‘what we should have done’ to ‘we’re so glad we did that.’ Sadly, this active shooter preparation is necessary now. Each school district in the country, and each school building for that matter, will have slightly different protocols. However, the one thing that is the SAME for every school is the need to shorten notification and response times in any emergency and save lives. The only way to do that without a lot of time invested, no training, and very little expense, is with SchoolGuard, first-and-foremost.

During training, when the teachers activated their SchoolGuard app, 911 was called right away, and those of us with the Hero911 app could see how many Hero911 officers were in the area. When each officer responded, we could see who was going to be there. This was important because off-duty officers are usually in plain clothes. We need to know who each person is at the scene, and when not in uniform, it could cause confusion.

The Hero911 app also has a timer, so we could see how long it had been since the SchoolGaurd panic button was hit. Officers began showing up almost instantly and continued to arrive for several minutes. In our rural community, with miles and miles between us, there was no greater proof that it worked.”

When those with intent to harm know a school is protected by a panic button system and all the security that surrounds it, it is a deterrent. They are less likely to attack that place.

Detective Stewart said that active intruder training on this scale is not something just certain schools can do. Everyone can do it. “We put together a volunteer team of school employees, first responders, and law enforcement who had active shooter training, to meet once a month over lunch to work on the plan. We strategized for a year. We were so glad we did it! The results were tremendous.

After our first intruder training enactment, the disastrous holes in what we thought was a good plan became obvious. For the next year, in our district-wide, monthly safety and security meetings, we were able to plug those holes and work toward an even better plan – one that would make the next training day less stressful and more organized. Each time we do it, we’ll have fewer issues to fix, so it becomes more natural, just like fire drills.”

When asked what other schools can do to prepare for active shooter incidents, especially if they don’t have the resources for an active shooter training day, he said, “My recommendations are this:

When there is a thorough and well-known active shooter or intruder plan, there is less frustration and more control among the staff. There is less likelihood a shooter will target a school that is prepared. When there is no plan, that’s when kids get hurt or killed needlessly. Active shooters aren’t going away – we have to prepare and preempt their attempts in order to save lives.”

The worst thing you can do is have the mentality of ‘it will never happen here.’ It’s unrealistic and short-sighted and may cost your kids’ lives.

As the second-largest employer in the county and one of the biggest student populations in the state, Guard911 applauds Detective Stewart and this Missouri school district for being a model of what other schools can accomplish when they put safety and security first and allow children to focus on learning.

Panic button technology is so effective, Alyssa’s Law mandates the installation of panic alarms that are directly linked to law enforcement in all schools. Are you ready?